Posted on June 6, 2012 by miningjusticealliance 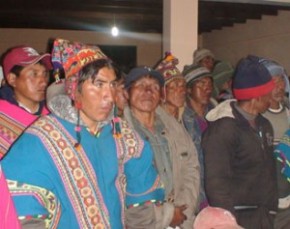 This detailed briefing paper outlines a state of emergency in the indigenous community of Mallku Khota, located in Northern Potosi, Bolivia. South American Silver is a Canadian junior league exploration company, funded via the TSX. The article places this particular mining struggle in the broader context of Canadian government policy and international relations of trade and exploitation.

The indigenous community of Mallku Khota is  in a state of emergency for resisting the continued operations of South American Silver Corporation’s (SASC) subsidiary, (CMMK). On May 28th, 2012, the governor of Potosi pleaded to the national government to militarize the zone where mineral exploration is ongoing. His calls to militarize the zone follow several weeks of rising tension between the community of MallkuKhota (opposing continued operations) and neighbouring communities in favour of continuing operations and the department of Potosi. n Saturday May 5th, 2012 at four in the morning, approximately 50 police officers entered into the homes of the families of indigenous community, Mallku Khota located in Northern Potosi, Bolivia. The community lives among the current area of exploration of the Compañía Minera Mallku Khota subsidiary of South American Silver, a Canadian junior league exploration company. According to community members who experienced the violence, not only were the sleeping resident’s homes gassed, but also women and children experienced physical violence, and some community leaders were apprehended, later to escape.[1] Now, over three weeks later, the community is facing further persecution with one of the main political figureheads of the conflict, Tata Cancio Rojas, recently being apprehended and charged by the commander of the police department of Potosi with attempted homicide among other charges. The crime, according to both the accused, his defense, and those working closely with him, is not only unjustified but outright political fabrication aimed at demobilizing the culminating dissent against the company and its continued explorations.