Posted on September 13, 2018 by miningjusticealliance
Source: TeleSUR
The Marakame Margarito Diaz Gonzalez was murdered at his home, in front of his wife, on Saturday. 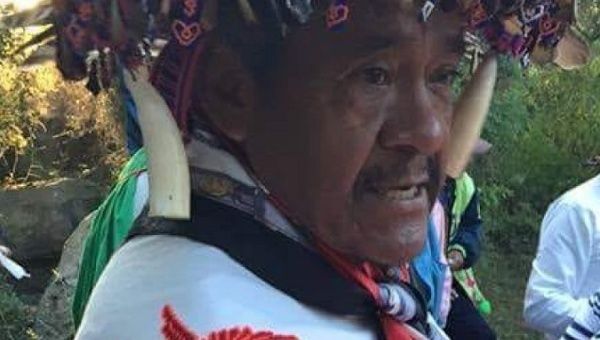 Margarito Diaz was a prominent rights defender in his community, concerned about the sacred territory of the Wixarika people. | Photo: Facebook Ismerai Betanzos

People close to Diaz Gonzalez said he was at home with his wife when someone knocked on the door on Saturday. He was then shot in the face as he opened it. Despite being an important figure in his community, both in spiritual and political terms, the police didn’t open an investigation. It wasn’t until his funeral on Tuesday that the news emerged, putting pressure on the government.

The Marakame dedicated his life to the preservation of the Wixarika culture and the defense of their ancestral territory in the face of continuous invasions by companies and landowners.

He was a representative of his community at the Security Council of Wirikuta, aiming to protect the sacred desert lands to which Wixarikas peregrinate and which is under threat from Canadian mining companies. He was also a member of the Wixarika Union of Ceremonial Centers of Jalisco, Durango and Nayarit.

His activism and prominent leadership among the Wixarika peoples had made him a well-known figure in the country’s Indigenous and environmental struggles, which often go hand-in-hand.

Recently, Diaz Gonzalez was demanding authorities help the community and fence off 3.5 hectares of the Tatei Haramara sacred area because of recent incendiary attacks on the ceremonial center.

In 2017, Miguel Vazquez and his brother Agustin, also prominent rights defenders in their community, were murdered in Kuruxi Manuwe, southern Jalisco.

Wirikuta was declared a Natural Protected Area in 1994 and is regarded as sacred by the Wixarika people. However, since the 20th century the Mexican government has granted mining licenses in the territory, including 22 for the exploitation of silver and other minerals to the Canadian First Majestic Silver Corporation.

None of these licenses were granted with previous consultation to the Wixarika people, a requisite according to Convention 169 of the International Labor Organization.