Posted on April 27, 2019 by miningjusticealliance 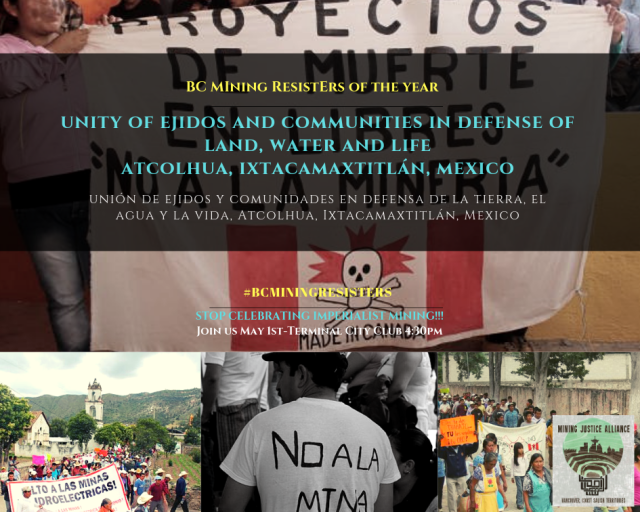 I am professor emeritus from l’Université de Montréal. As an anthropologist, I have been involved during more than forty years with the indigenous peoples who live in the Sierra Norte de Puebla, Mexico, both Nahua and Totonac. I have witnessed the birth and development of strong and successful indigenous organizations, first to oppose the non-indigenous elite which  used to manage the regional economy and politics according to their own interests. In 2013, the communities realized that 55 thousand hectares in the municipality of Ixtacamaxtitlán had been concessioned for open-pit gold and silver mining to Almaden Minerals, a Vancouver-based mining company, which operates in the area through the name of its subsidiary, Minera Gorrión,.

Indigenous farmers joined in the Union de ejidos y comunidades, which represents 15 communities and thousands of indigenous persons to oppose the project. The company claims that there will be no environmental damage, in spite of the fact that they will draw an enormous amount of water which Nahua indigenous farmers rely on, in this relatively dry area. An independent research group, PODER, has shown in its Human Rights Impact Evaluation the disastrous  consequences of the project for the population of the whole area. Moreover, Mexico has signed and ratified the ILO Convention 169 on the rights of indigenous peoples, which requires a « free, prior and informed consultation » before any « development project » could take place on indigenous territory. No such consultation has ever taken place in Ixtacamaxtitlán ; instead, Almaden concentrated its efforts on the federal, state and municipal levels, in order to get official approval for their project. But the Nahua communities continued to mobilize and resist through legal means against the destruction of their ancestral territory.

Almaden has gone as far as denying the presence of indigenous peoples in the area, which contradicts both official statistics and our own research. People in Ixtacamaxtitlán have the support from all of the other indigenous organizations of the area, which is easy to understand since they mine would be located near the source of the Apulco river, which flows down the mountains of the Sierra Madre Oriental, through an area inhabited by tens of thousands of indigenous farmers.

At this very moment, the struggle against Almaden is at a turning point. The indigenous community of Tecoltemic is expecting a decision from the courts regarding its 2015 request for a permanent injunction against any mining on its communal lands. Additionally, the Mexican Federal Government has to either approve or reject the company’s Environmental Impact Statement. The new government, led by Andrés Manuel López Obrador, while openly in favour of the mine, is also vulnerable, wanting to maintain its international image as « environmentally friendly » and  « in touch with the concerns of Indigenous peoples ».

In this context, an international recognition by the Mining Justice Alliance of the struggle of the Unión de ejidos y comunidades en defensa de la tierra, el agua y la vida, Atcolhua, against Almaden Minerals, a Canadian multinational company, could make an important difference for the Nahua indigenous people in resistance to this project. I thus strongly recommend the Unión as the « Mining Resisters of the Year ».

In 2014 the communities of Ixtacamaxtitlán started to mobilize against the Canadian mining company Almaden Minerals. Through local consultations, street protest, lawsuits, public campaigns and appeals to economic valuation of the environment, the communities have shown their discontent and opposition against a project that may destroy their territory. With the Caravana por la Vida en la Sierra Norte de Puebla (Caravan for life in the Northern Sierra of Puebla) the resisters have marched in Puebla, Mexico City and Vancouver to show to the investors that the project in their territories does not have their consent. In these efforts, local communities have been supported by allied organizations including Centro de Estudios para el Desarrollo Rural (Center of Studies for Rural Development – CESDER); Project on Organizing, Development, Education, and Research (PODER): Mexican Institute for Community Development (Instituto Mexicano para el Desarrollo Comunitario – IMDEC); Consejo Tiyat Tlali.

Mining projects often sow seeds of conflict among locals. Even as Ixtacamaxtitlán activists have faced community division, criminalization, and the loss of some members, the mobilization continues in the concessioned territories. The most recent victory for the resisters is regarding the Court’s injunction to Indigenous community against Almaden Minerals’ mining concessions. The Second District Courthouse responsible for Civil Protection Measures and Administrative, Labour and Federal Processes in the state of Puebla sanctioned that the two mining concessions that the Secretary of Economy gave to Almaden were illegal. In its decision, the court not only recognized that the community’s right to consultation was violated, but also the community’s right to free, prior and informed consent. The court did not review the arguments of unconstitutionality of the mining law that the community presented, but the court found that the legislature had failed in its obligation to update the law and include the rights to consultation and informed consent. Even when this decision is subject to appeal by either of the parties involved, the decision of the court represents significant progress in the case against the Canadian mining projects in the state.

The case of the community in the Sierra Norte of Puebla is a story of perseverance and protection of an ancestral territory against a transnational company that has used their resources to undermine the local voices. We admire the strength of the local leaders that have rejected the short-term economic benefits that Almaden is providing. We applaud their interest in informing themselves on the effects on the open-pit mining and their engagement in the resistance against it.  We are amazed by their capacity to resist in the name of the next generations that will live in the territory since it shows the long-term vision of the community. We admire the leadership of the communities and their capacity to share their concerns with their allies, avoiding the individualization of the struggle. Especially as so many activists are dangerously criminalized, it is inspiring to see communities that are organizing, resisting and persevering against extractivismo.

Join us to celebrate BC Mining Resisters of the Year at the GALA OF RESISTANCE on Wednesday, May 1st in Vancouver, BC, unceded Coast Salish Territories.